The Million at the Mansion

An unexpected discovery at the Morris-Jumel Mansion yielded the highest auction price ever – nearly a million dollars – for a Revolutionary War-era document manuscript.

Brian Hendelson, a coin dealer from New Jersey, paid $912,500 at Keno Auctions for the 12-page, handwritten document written in 1775 by a founding father. He compared it to owning an original draft of the Declaration of Independence.

“I am very excited about adding this amazing piece of history to my collection. To be able to buy any original manuscript relating to our independence is an extremely rare opportunity,” he said. “To have the opportunity to own the original draft of the final plea to Great Britain is even more extraordinary.”

On Sun., Jan. 26th, so many collectors converged for the sale that the auction house assembled three times the usual number of chairs. An unprecedented nine phone bidders were also standing by.

“It was unusually exciting for a single item sale,” said Seth Kaller, a consultant for Keno Auctions. Three of his clients, including the buyer, bid on the manuscript. “There were five bidders above the high estimate.”

The sale quadruples the endowment of the Morris-Jumel Mansion, Manhattan’s oldest house.

Leigh Keno knew it would fetch much more. Together with his twin brother Leslie, he’d been in the business for decades. They’d both worked at premier auction houses and became household names from their television appearances on Antiques Roadshow. 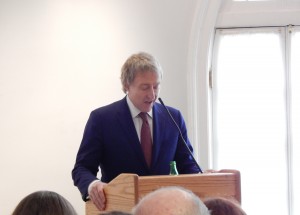 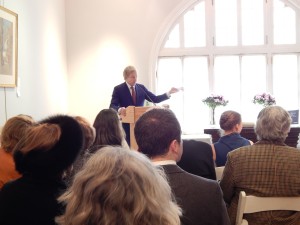 The auction drew three times as many attendees as the house usually receives.

As President of the specialty auction house, Keno made the sale a priority. He designed an entire marketing campaign around it and made it a rare single item auction. He would handle the auction personally, and scheduled it for the end of Americana Week, when buyers of historical artifacts throng to New York.

“He also has a lot of great connections,” said Carol Ward. “He’s definitely a good schmoozer.”

Ward, the Morris-Jumel Mansion’s Executive Director, knew a lot was at stake at the sale. She sat next to Emilie Gruchow in the front row.

Gruchow was recently promoted from intern to archivist.

Last summer, Gruchow was organizing museum papers when she came across a large envelope containing yellowed pages covered with writing. Some of the paragraphs were crossed out with notes in the margins. The writing was in two or three different hands.

Gruchow became excited when she recognized the wording. It was the first draft of a famous pre-Revolutionary War document. Its author had been a mystery for the past 240 years.

An unprecedented nine phone bidders stood by during the auction.

Built in 1765, the Mansion is Manhattan’s oldest home, and also served as George Washington’s headquarters during the Revolution.

Four phone bidders were interested in the document, but the bidding slowed when it reached $250,000. Ward and Gruchow grew nervous. Repairs would cost far more.

Keno wouldn’t let the bidding stall for long. As the price climbed past $300,000, only two phone bidders remained.

It was exciting, even a little surreal for Ward and Gruchow. Both are young and relatively new at the museum. Ward started as Education Director, and was appointed director just months before the discovery. She has a fast-growing reputation for breathing new life into the stodgy historic house with imaginative programming and exciting exhibits.

Gruchow is earning a master’s degree in history at City College. When she discovered the document, she asked Michael Hattem, a teaching fellow in early American History at Yale, to look at it. He realized the handwriting belonged to one of the authors of the Declaration of Independence, Robert Livingston. One of Gruchow’s ancestors was a tenant farmer on a Livingston estate.

One of Livingston’s direct descendants introduced herself to Gruchow at the auction. She was also a direct descendant of John Jay, another founding father. Hattem thinks Jay was the author of some of the comments in the margin.

Livingston and Jay were close friends but later their political opinions diverged. They ended up as bitter enemies.

The two women examined the document together. A preservationist had restored it and it was the first time Gruchow had seen it in months. They touched it and Gruchow pointed out its nuances. The woman’s face lit up. “It was one of those moments when it becomes a very personal experience,” Gruchow said.

“It was a post-revolutionary democratic moment – where the tenant farmer and a Livingston are looking at the document together,” she added.

Officially called the “Letter from the Twelve United States Colonies, by their Delegates in Congress to the Inhabitants of Great Britain,” it was an attempt by the Continental Congress to sway British popular opinion away from war.

Written by Livingston, with edits made by Jay and Richard Lee of Virginia, it reveals the founding fathers’ thinking on whether or not war with England was inevitable. The back and forth language places the document right at the brink of where colonial identity turns from British subject into independent American.

The auction drew three times as many attendees as the house usually receives.

At Sunday’s auction, after a brief lull, the bidding shot past $350,000 and continued to climb. Ward recognized that purchaser was just as important as the price.

She knew the buyer would inevitably be a private collector. Most museums and historical societies don’t have large reserves of cash. Ward hoped whoever bought it would be civic-minded enough to lend the document to a museum, where people could see it.

“You can read about documents, but there is something special about seeing it,” said Kaller. When people see a reproduction of a famous document in a museum, their reaction is different. “It’s not the same sort of connection.”

By the time the bidding reached $600,000, Ward and Gruchow were shaking and squeezing hands. Ward thought, “I can’t believe what’s going on right now.”

Tears filled their eyes when the bidding finally stopped. Keno announced the final sale at $730,000 and the room erupted in celebration.

“There were a lot of hugs, handshakes, champagne and applause,” said Gruchow.

“We were like, ‘Can you believe this?’” Ward said. “It was beyond my wildest imagination to sell at that level.”

“We were like, ‘Can you believe this?’” said Ward (second from left), with Mansion staff.

Keno remarked, “I am elated that that the manuscript did so well. All of the proceeds benefit one of the finest house museums in New York City. The fact that the buyer is a public-minded individual accustomed to lending to public institutions is the best news of all.”

The sale quadruples the Morris-Jumel Mansion’s endowment. Ward said, “Obviously the money is great and we are so pleased about the money—but it’s so much more than the money.”

The historic sale puts the small museum squarely on the city’s cultural map, opening up new opportunities. With their newly acquired cultural clout, they can expect to ask funders to shore up their sagging building and preserve their endowment. After grueling weeks of worry over the structural integrity of the building, it was a symbolic moment of release.

Hendelson will lend the document to the New York Historical Society. He has also agreed to lend it to the Mansion for special occasions.

“And we can visit it whenever we want,” said Ward.