It was lying in a drawer in the attic, a 12-page document that was not just forgotten but misfiled. Somehow it had made its way into a folder with colonial-era doctor’s bills that someone in the 1970s decreed was worthless and should be thrown away.

Luckily, no one did. For when Emilie Gruchow opened the folder last summer and separated it from the doctor’s bills, she recognized it as a one-of-a-kind document.

Ms. Gruchow, an archivist at the Morris-Jumel Mansion, was an intern at the museum in Upper Manhattan when she made her discovery. The mansion served as George Washington’s headquarters during the Revolutionary War. She realized the document was the draft of an urgent plea for reconciliation from the Continental Congress. It was addressed to the people of Britain, not King George III and his government, and began by mentioning “the tender ties which bind us to each other” and “the glorious achievements of our common ancestors.” 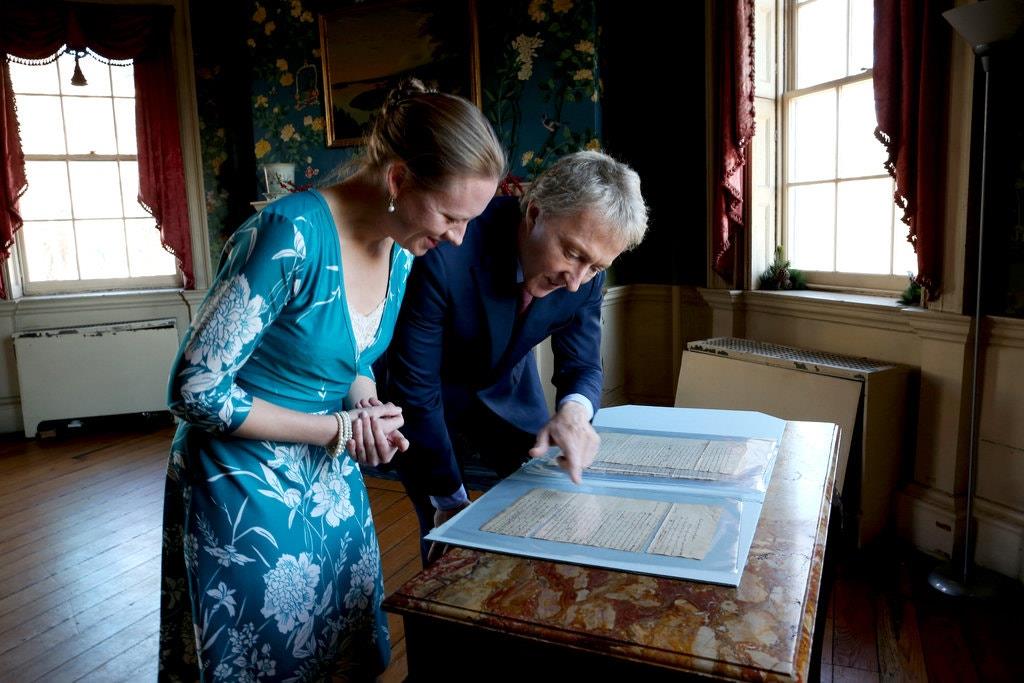 That was followed by a long list of complaints about the infringement of colonists’ rights, the restrictions on trade and the “rigorous acts of oppression which are daily exercised in the Town of Boston.”

“That once populous, flourishing, commercial Town is now Garrisoned by an army sent not to protect, but to enslave its inhabitants,” the document said.

Until Ms. Gruchow found it, only the final, printed version from July 1775 had been known to exist. She consulted with Michael D. Hattem, a teaching fellow and research assistant on The Papers of Benjamin Franklin at Yale. He analyzed the handwriting on the yellowed pages of the manuscript and did textual analysis that led to an unexpected conclusion: The document was written by Robert R. Livingston, a prominent New York jurist who had been on the fence about whether to support independence for the colonies.

The following year, Congress tapped Livingston to draft the Declaration of Independence along with Thomas Jefferson, John Adams, Benjamin Franklin and Roger Sherman. Livingston went on to swear in Washington as the first president. Other historians who have reviewed the document Ms. Gruchow found say her discovery explains why he was chosen. It could also change the perception of Livingston’s role in the push for independence because it had always been assumed that the document at the mansion was the work of another prominent colonial figure, Richard Henry Lee of Virginia.

Now the museum’s director and trustees have decided to sell the document at auction. The money it brings will go toward the mansion’s long-term survival. The sale, being handled by Keno Auctions in Manhattan, is scheduled for Jan. 26. The estimated selling price is $100,000 to $400,000.

Carol S. Ward, the museum’s director, said the museum would put the money in an endowment. “We want to have a nest egg,” she said.

“We don’t want to put a Band-Aid and just paint the house again,” Ms. Ward said. “That means restoring the woodwork, making sure the proper sealants are in place, then painting. It’s a top-to-bottom face-lift, but the exterior needs to come first. We don’t want to start any interior restoration projects until the outside is squared away.”

The museum conducted a fund-raising campaign on the website Indiegogo.com that raised about $25,000, she said. The museum has an annual budget of about $250,000 and ran a deficit of $30,000 in its last fiscal year, she said, adding that she expected to break even in the current fiscal year by raising admission charges for school tours and prices in the gift shop.

Ms. Ward said the museum decided to sell the manuscript after thinking about “how the document is best served.”

By the time the document reached London, George III had already issued a proclamation declaring the colonies to be in rebellion and urging official repression. It is not clear whether he knew about it. Ms. Gruchow said it is believed he did not read the document in 1775 and may never have read it.

It was not widely distributed in the colonies, but she said it found an audience. James Madison raved about it shortly after it was printed — Leigh Keno, the founder and president of the auction house, said Madison wondered who had written it — and Abigail Adams also mentioned it after John Adams sent it to her.